5 things to do while staying home
Share
Back to Articles

Long Island Landmarks You Can See Without Leaving Your Car

Take Montauk Highway to "The End" and catch beautiful vistas of Montauk Point State Park and the Montauk Lighthouse.

Historical fact: The Montauk Point Lighthouse is the oldest lighthouse in New York State. The Lighthouse was authorized by the Second Congress, under President George Washington, in 1792. Construction began on June 7, 1796, and was completed on November 5, 1796. It still serves as an aid to navigation.

Flander's Big Duck is an icon that you don't need a passport to see.

Historical Fact: Along Route 24 in Flanders is a pretty big reminder of what once was. "The Big Duck," a 20 foot tall and 30 foot long mini-museum in the shape of a duck as a testament to Long Island's signature industry in duck farming.

Many of us Long Islanders know it as "The Pencil"- the Jones Beach Water Tower is iconic and is a functioning water tower.

Historical Fact: The architectural inspiration is the bell tower of St Mark's Basilica in Venice, built in an Art Deco style and extends more than 1000 feet underground. 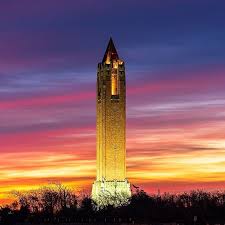 Point Lookout remembers 9/11 with a beautiful beach-side memorial that overlooks the Atlantic Ocean. It's a must see and eas

Historical Fact: the memorial opened in 2017 and features a twisted, 30-foot-tall beam of Trade Center steel, an elevated walkway and granite plaques throughout.

5. Time for a legend

It's not very often that you can find a hero right on Main Street but Stony Brook has it's own Hercules!

Historical Fact: Located on Main Street in Stony Brook- is the Hercules figurehead and anchor from the prestigious U.S.S. Ohio, the first ship launched from the Brooklyn Navy Yard in 1820.  Toward the end of the century, the U.S.S. Ohio was decommissioned, destroyed and sunk in Greenport, Long Island; however, the figurehead was saved. 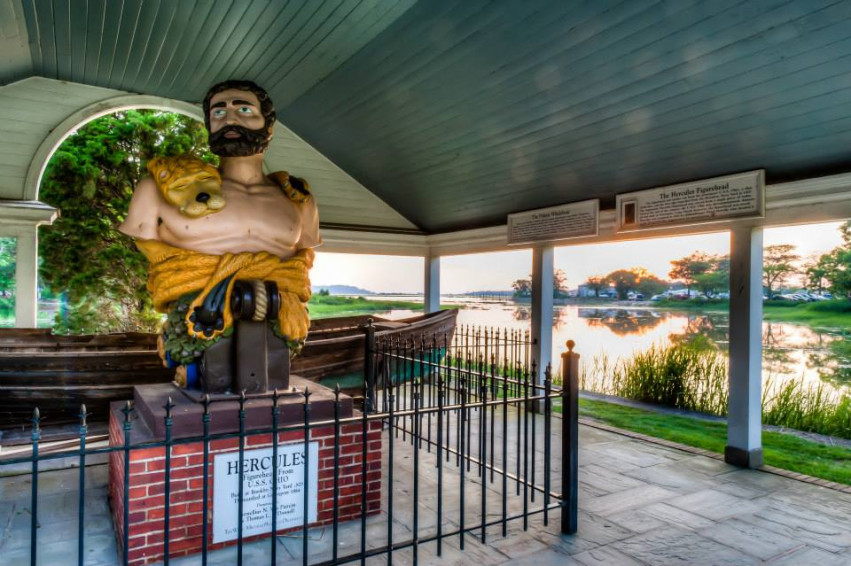 Regardless about how you feel about them, the Northport Power Station are well known landmarks on the North Shore and a guidance for boat navigation.

Historical Fact: The four enormous candy-striped smoke stacks are a defining landmark of Northport and can be seen from up to 36 miles away atop East Rock in New Haven, Connecticut, across Long Island Sound. Each stack is 600 feet

A trip on the North Shore is not complete without a glimpse of a Gold Coast Mansion. Coindre Hall owned by Suffolk County sits in Huntington on the outskirts of Lloyd Harbor overlooking Huntington Harbor.

Historical Fact: Coindre Hall Park is a 33 acre park and 80,000 square foot mansion overlooking Huntington Harbor. Built for pharmaceutical giant George McKesson Brown in 1912, this mansion represents the height of the Gold Coast era with its Medieval turrets and sweeping views of the harbor. 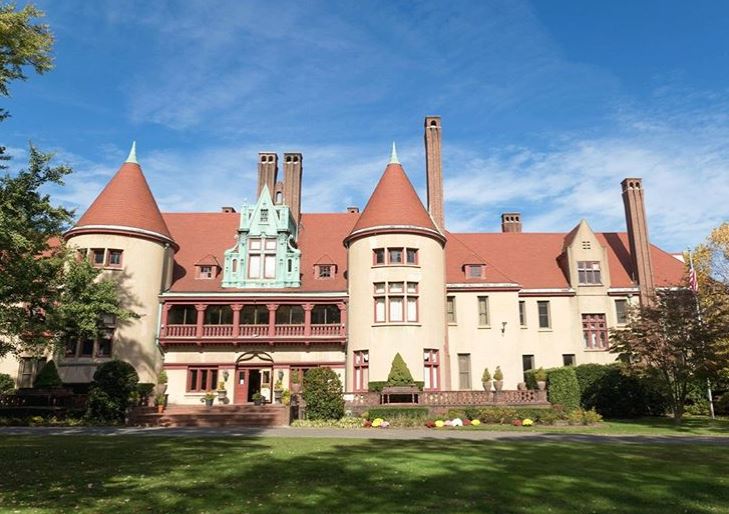 Overlooking Main Road on the North Fork, Chief Running Fair oversees traffic and those attending races and is iconic as the Riverhead Raceway itself.

Historical Fact: The Indian, The Riverhead Raceway owners said, was first purchased from the Danbury Fair in Connecticut when it went out of business in 1980. The owners used to run the Suffolk County Fair at the raceway where the Indian was used to entice children to hear bout Long Island's Native American population. Based on his claim to fame, the Cromartys named the Indian Chief Running Fair. The local icon received his five minutes of fame in the national spotlight when the television show "The Sopranos" used Riverhead Raceway for a segment -- just because executives wanted to feature the larger-than-life Indian.

Sitting at the split of 25 and 25A is Whisper the Bull!

Historical Fact: The fate of the bull was not guaranteed- In 1923, the casting was complete and ready for shipment. However, the funds were not raised and the statue was not shipped to Smithtown. It sat instead in front of the Brooklyn Museum for a number of years before being placed into storage.

10. A President Riding In

Get greeted by Theodore Roosevelt, the rough rider as you enter into Oyster Bay.

Festive fun and holiday events across Long Island. From breakfast with Santa to live performances and light shows - there's something for the entire family!

Warm up at restaurants with Igloo Dining on Long Island, NY

Selling a House During Winter Months

The buyers actively shopping for a new home in the winter are likely very motivated. With fewer homes on the market in winter, there’s less competition from other sellers, and a limited inventory for buyers.

Events on Long Island this weekend! Search for local fun things to do with our event calendar.

Lucky To Have Farmers Markets & Farm Stands on Long Island!

Just in time for Summer~ Outdoor Farmer’s Markets! We are lucky to have two of them right along 25A ~ in Northport on Saturdays and a farm-stand in Greenlawn everyday. Lloyd Harbor - Centerport - Northport - Cold Spring Harbor - Laurel...

Get out, get fit, socialize and enjoy beautiful surrounding at these runs and walks in the Huntington area including those in Cold Spring Harbor, Lloyd Harbor's Caumsett State Park and the popular Huntington Townwide Fund's Thanksgi...